The Accident was published just over two weeks ago and I feel like my feet haven’t touched the ground since. It really has been incredible, reading so many positive reviews from book bloggers and watching as a buzz built up on Twitter as readers started to recommend my book to each other. There have been moments where I’ve felt like The Accident has taken on a life of it’s own and, even if I wanted to, I couldn’t stop the momentum that has built.

Today I woke up to find that it was number 7 in the top 100 Kindle chart. Number 7?! I probably use the phrase ‘it melted my head’ too much but it did. The Accident was also number 1 in the Murder, Suspense and Thriller charts and number 114 in the paperback chart. It’s slipped down to number 10 at the time of writing this and I really need to stop checking. I’m developing a really rather unhealthy obsession with Amazon! 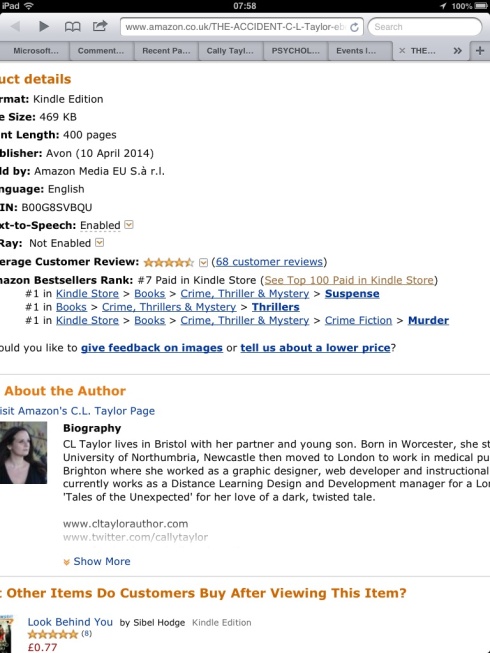 I’ve had my first newspaper review and it was a really positive one in the Daily Mail:

‘This is an enjoyable rollercoaster of a suspense novel with multiple twists.’ DAILY MAIL

The Accident was also featured in WOMAN magazine: 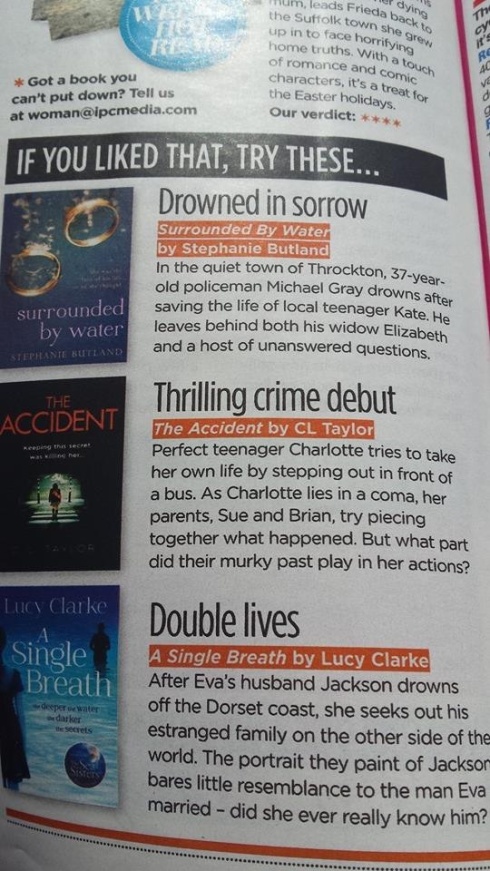 And some fabulous websites including Female First, Mslexia and We Love This Book have included interviews and articles I’ve done. There’s a list of them on the ‘Interviews and Articles‘ page of my website.

A couple of days before publication I went to the Caledonian Club in London for The Lady magazine literary luncheon where I was interviewed by Annabel Giles. I was incredibly nervous as I’ve never been interviewed by anyone before but the lovely ladies at my table, and Annabel herself, completely put me at my ease.

Promotion for The Accident is continuing and I still have a few articles to write and interviews to answer but, with publication day behind us it’s starting to wind down now…just in time to start back up again for the American publication of BEFORE I WAKE (the US title for The Accident) in June. Sourcebooks have told me they’ve got a 21 day blog tour planned so I’m going to be busy! I also have to finish the second draft of my second psychological thriller LAST GIRL STANDING by July which is when I’ve said I’ll deliver to to my editors. Here’s the elevator pitch I came up with the other day:

It’s about four female friends, each with a dark secret, who go to a retreat in Nepal. Instead of finding peace and relaxation they find themselves in a deadly situation where they’re forced to turn against each other in order to survive.

I’d been struggling with the rewrite, partly because I’ve been distracted by all the excitement surrounding The Accident but also because something wasn’t quite right with the plot but I couldn’t work out what. It suddenly came to me as I was falling asleep last night – I knew exactly what was wrong – and when my partner took our son to his swimming lesson this morning I set about fixing it. I’ve still got a good 40,000 words to work my way through and rewrite, including five chapters at the end of the book that I have to write from scratch, so I’m going to be incredibly busy between now and July but I wouldn’t have it any other way. An idea for a third psychological thriller is itching to be written but it’s just going to have to sit tight for now.

Huge, HUGE thanks to everyone who’s taken a chance on The Accident and bought a copy and tweeted, Facebooked or blogged about it or recommended it to a friend. I can’t thank you enough.

2 thoughts on “An amazing couple of weeks”