April was a hugely busy month. The Missing came out, I wrote a ton of short stories to promote it (okay, four) and I spent a lot of time preparing a workshop called The Art of the Thriller for Chipping Norton Literary Festival. I went to ChipLitFest for the first time last year and had such a great time I was really excited to go back.

Despite a few technical difficulties at the beginning (thank you Windows 10 updates!) the workshop went brilliantly well. I had a full class and they were hugely attentive, read out some great work and I was thrilled with the feedback I received at the end. After a quick break for lunch it was time for my panel with Amanda Jennings, Hannah Beckerman and Lucy Atkins. We were discussing the greatest liars in fiction and I championed Amy from Gone Girl whilst the others fought the cause for Gatsby, Tom Ripley and Briony from Atonement. It was a fascinating discussion.

One of the highlights of the festival was listening to Fay Weldon chat to Jane Wenham-Jones about her new book Before the War and her career to date. Fay Weldon’s ‘She Devil’ character had a huge impact on me as a teenager and I shared that with Fay when I briefly spoke to her after the event and she signed several books for me. 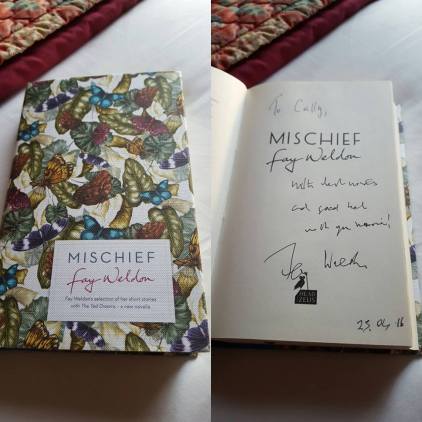 A week or so after ChipLitFest I went to my first library event of the year – at Bristol library. The organisers were lovely, there was a great turnout  and I was asked some really insightful questions about The Missing. Like a lot of writers I’m not at my most comfortable when I’m the centre of attention but I couldn’t have been made more welcome.

In my last post I talked about my excitement about becoming a Sunday Times Bestseller for the second time. There was more good news to come – The Missing went to No.1 on Amazon Kindle, Kobo, Sainsbury, iBooks – and it’s continuing to sell well. Since publication I’ve received several emails from readers that have really touched me – one from a male reader who told me that my books have ignited a new love of reading and one from a female reader who had lost interest in books after some difficult life events and The Missing gave her a zest for reading again. Both emails made me cry. I’m not sure I’ve got the words to explain why but those messages made me feel humbled and touched, flattered and proud. For my books to have made such an impact is the biggest compliment I could ever be  paid.

I’m still writing the first draft of the next book (out in April 2017). I’m nearly 40,000 words in now and the midpoint is nearly within touching distance. Psychologically crossing the 50,000 word mark is really important. It means I’ve written more words than I’ve got left to write and that helps spur me on. Talking of which, time to end this blog post and get back to the book.

If you’d like to be kept informed when I’ve got book news (cover and title reveals, events etc) or want to enter exclusive giveaways for signed copies and other book-related goodies do please sign up to join the CL Taylor Book Club.

And if you’d like to nominate any of my books for the Dead Good Book Awards (and potentially win £200 worth of crime books for yourself) that would be lovely. Nominations close on 31st May. http://www.deadgoodbooks.co.uk/dead-good-reader-awards-2016/

Want to be the first to find out the title of my next book and have a sneak peek at the cover?
Join the FREE CL Taylor Book Club.

2 thoughts on “Festivals, libraries and fitting in words”