I was planning on blogging about what I’ve been up to the last couple of months – and I will – but first, I’m thrilled to announce that I’ve signed a new two book deal with Avon HarperCollins. That means I’ll be writing, and they’ll be publishing, a book a year until at least 2020!

AND I have signed a two book deal to write Young Adult (YA) thrillers for HarperCollins HQ. That means I’ll have two books published in 2017 and 2018 – a psychological thriller in April and a YA thriller in September!

The YA thriller was sold by my agent Madeleine Milburn on a synopsis and a partial (3 chapters) so I need to write the rest ASAP. I get my line edits back for my adult psychological thriller on Monday and, as soon as I’ve finished them, I need to start on the YA thriller (to be delivered at the end of January). In February I’ll need to research and plot the new adult book AND do my edits for the YA book so I can start writing the first draft of the adult book in March.

It’s going to be a busy couple of years for me on such a tight writing/delivery schedule but I’m incredibly fortunate to be in this situation. I’ve had the idea for the YA thriller for several years and I’m so, so lucky that, not only do I get to write it, but it’s going to be published too. I have also signed a deal for The Missing to be published by HarperCollins in the U.S. Apparently good things come in threes and they certainly have this year!

September and October have been incredibly busy months in terms of workload and public speaking events. I’ve only got one more event next week (a visit to a prison reading group to answer questions about THE MISSING) and then that’s it for me for this year. The only events I’ll be attending in November and December will be Christmas parties and book launches! 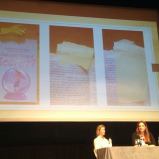 In my last post I mentioned giving the keynote speech at the York Festival of Writing (run by The Writers’ Workshop). I had an audience of several hundred unpublished authors and I was incredibly nervous. Public speaking doesn’t come naturally to most authors (me included) and I was terrified that I’d have a panic attack live on stage or completely dry up. Luckily neither of those things happened and, with my agent sitting beside me and a Powerpoint I’d prepared on screens behind me, the words flowed as I talked about the ups and downs of my publishing career. I very nearly choked up as I talked about how the death of a school friend when we were both 33 spurred me to to write my first novel but I got through it. After the speech I was stopped by so many aspiring authors, wanting to tell me how funny and truthful and inspiring my talk was.  I was incredibly touched by their reaction. The Festival of Writing in York is an amazing opportunity for unpublished authors to connect with agents, editor, book doctors and authors. I only wish it had been around when I was starting out!

This month I appeared on Laura Rawling’s show on BBC Radio Bristol to talk about the writing masterclass I gave yesterday (in association with Novel Nights for the Bristol Festival of Literature) on how to write a novel readers won’t want to put down. You can listen to the interview here (I’m on from 1 hour 45 mins and 30 seconds). I was also videoed giving my five top tips for writing a novel. You can watch them here. 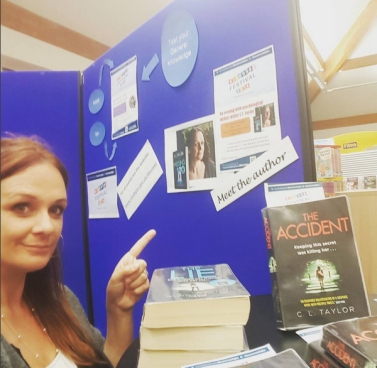 After I’d appeared on the radio I took a taxi to Emerson Green library when I talked to a lovely audience about my books and my career to date. I finally got home at 10pm.

This week it’s been the Frankfurt Book Fair and, whilst I didn’t attend, my editor at Avon sent me these photos of my books on the HarperCollins UK stand and my photo next to David Walliams’ photo. Amazing! 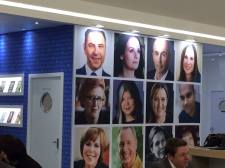 I’ve seen the cover for next adult psychological thriller book and I LOVE it! I’ll be giving a sneak peek to all the members of my FREE CL Taylor Book Club as soon as my publisher gives me the thumbs up. Sign up now if you’d like to see it too. You’ll also receive a free short story for joining.

One thought on “A new deal, a new genre and a new US publisher!”