Over the last couple of years hundreds of readers have told me that my books would make great films/tv shows and now I can finally share some VERY exciting news on that front.

THE LIE has been optioned by The Forge, the TV production company behind the amazing Channel 4 drama ‘National Treasure’ featuring Robbie Coltrane. I am beyond thrilled.

Fingers crossed that The Lie (or a version of it) will appear on your TV at some point in the next few years!

The Forge was set up by George Faber in 2014. Previously, George ran Company Pictures, which he co-founded in 1998 with Charlie Pattinson. During his 12 years there, the company grew into one of the UK’s largest, most successful and highly regarded UK drama indies, winning Golden Globes, EMMYs, BAFTAs and RTS Awards for its wide-ranging productions including Shameless, Skins, Elizabeth I, Generation Kill, The Shadow Line, The Devil’s Whore, The Village, Wild At Heart, The Life and Death of Peter Sellers, A Room for Romeo Brass and Morvern Callar. Prior to his time at Company Pictures, George was Head of Single Drama for the BBC.

The text in the paragraph above is quoted from The Forge’s website: http://theforgeentertainment.co.uk 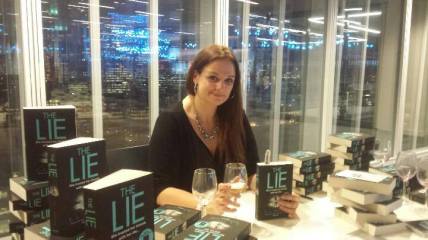 Not long now until my next psychological thriller, THE ESCAPE, comes out. I will be giving away TEN exclusive proofs to members of my free CL Taylor Book Club. I also have some great goodies to give away – including champagne, jewellery, tote bags and signed copies of my books – when my total book sales hit the magic one million mark (not far off).  Join now if you don’t want to miss out.

6 thoughts on “The Lie, optioned for TV by The Forge”