Skip to content
Posted on April 4, 2016 by C.L. Taylor Posted in Uncategorized

Only three days to go until The Missing is published (although some copies have already been spotted on shelves) and things are getting exciting!

I have been floored by some of the wonderful things the book bloggers have said about The Missing (you can read a selection here). The Lie did so well – unexpectedly well for a second book – and I was terrified that The Missing would suffer by comparison as it’s such a different book, but my fears seem to be unfounded. The reaction seems to be overwhelmingly positive so far, with some bloggers saying that it’s their favourite of my books. I know that some reviewers and readers will prefer one of my other books and that’s totally okay, but it is hugely reassuring to read comments like “C L Taylor’s books keep getting better and better.”

As well as the book bloggers reviews The Missing has had some great press in the newspapers, magazines and online reading communities. The Sun’s reviewer said, ‘it kept me guessing until the end’, The Sunday Express’s magazine ‘S’ featured it in their MUST HAVE section and Lovereading.co.uk named The Missing as one of their Books of the Month for April and said it was ‘An intriguing and stirring tale, overflowing with family drama.’

On Thursday last week I went up to HarperCollins’ Towers (aka the News Corp Building) and recorded some audio to support the release of the audiobook of The Missing. Today I received a tweet from HarperAudio saying that Chapter One, read by Clare Corbett (who also narrated The Girl on the Train by Paula Hawkins and The Widow by Fiona Barton), was available for free.

OH. MY. GOD. She did SUCH an amazing job. Honestly, I couldn’t have asked for a better narrator. She has totally nailed the Bristol accent and tone of my main character Claire. I am over the moon and can’t wait to hear the whole thing. Chapters 1 to 5 will be released for free over the next few days and weeks and you can listen to Chapter 1 here.

When I returned home from London last week I had about an hour to grab a coffee and a sandwich and then I was live on ‘Blab’ with fellow authors Helen Smith and Marnie Riches. Blab is basically a live video call that viewers can watch and comment on, using a rolling messaging widget. I’d never used Blab before and it took me a while to get it working but then – DOOF – there I was on screen, live and more than a little flustered! We had a great chat about everything from missing children, to research, to how we write and if you fancy a sneak peek (including Helen’s comedy chipmunk voice when she had a technical fail too!) you can watch it again on the Britcrime website. 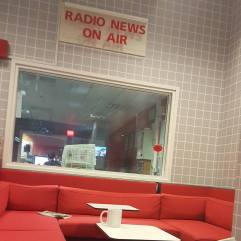 On Friday I basically lay on the sofa all day, allowing my four year old far too much screen time (I wasn’t feeling well) then I was up again on Saturday and off to BBC Radio Bristol to be interviewed by Laura Rawlings. I haven’t had a huge amount of experience with radio, other than an outside broadcast  for National Libraries Day last year, but our chat went really well (other than admitting that I watch reality TV!) and my ‘um’ count was definitely down on the last time.I was interviewed. You can catch up with BBC IPlayer here (I’m on from 2 hours 11 minutes in, for about ten minutes).

That’s about it for now, other than to say that if you want to find out a little bit more about The Missing then make sure you check out www.findbillywilkinson.com