I can’t believe it’s been nearly two months since I last posted on here. In some ways time has flown but I seem to have fitted quite a lot into the last sixty-odd days so here’s a (probably not very quick) round up.

First off was the HarperCollins author party in the V&A. It’s always a treat and this year was no exception. Here’s me and CJ Daugherty in the garden.

At the end of July I headed north to the Theakston’s Old Peculier Crime Festival in Harrogate. The weather wasn’t quite as glorious as it normally is but this year was my favourite Harrogate ever because…I won an award! The Escape won the Dead Good Books Hidden Depths award for Most Unreliable Narrator.

My books were shortlisted for Dead Good books awards in 2016 and 2015 and didn’t win and no one could have been more shocked than me when my name was read out this year. I’m surprised my gasp wasn’t heard for miles. Somehow I managed to give a speech but, by the time I had my photo taken outside my legs, were shaking and I may have had a little (happy) sob on my agent’s shoulder when she gave me a hug afterwards.

The Dead Good book awards are voted for  by readers and I couldn’t be more grateful to everyone who voted for me. A dream came true that day and, to say thank you, I’m doing a big giveaway on my Facebook page and a separate one for members of the C.L. Taylor Book Club. More details later on in this post.

I told one of my writer friends, Marnie Riches, that if I won the champagne was on me and, as I was queuing at the bar, I turned round and spotted a familiar face. I’m not normally the sort of person to talk to a celeb but I’d had a couple of glasses of Prosecco by this point and, before I could stop myself, ‘Are you Jeremy Vine?’ popped out of my mouth. When he said that yes, he was, I gushed about how much I enjoyed his Radio 2 programme.

We got chatting and he asked if I’d mind doing a live Facebook video for his page (you can see it here). The next day he sent me a tweet showing me that he’d bought a copy of The Escape and he even gave me a quote after he finished it, saying he hadn’t read a book as gripping since Gone Girl.  Such a nice man!

With the HarperCollins HQ team. 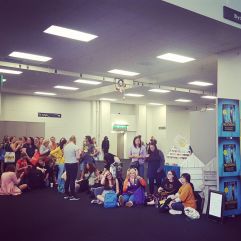 A couple of days after I got back from Harrogate I was off again – this time to London for YALC (the Young Adult Literary Convention) at Olympia. HarperCollins HQ had arranged a proof signing event for me and I turned up expecting to sign a handful of copies of The Treatment. Instead I arrived at the stall to find a queue of eighty YA readers patiently waiting for me to sign their copies. It was surreal. I’ve never signed so many books in my life and I’m sure I won’t again. It was a wonderful convention, full of excitement and enthusiasm for books and stories and several readers I spoke to were dragging suitcases full of books they’d bought or brought along for authors to sign.

After all that excitement it was time for me put my head down and finish my fifth psychological thriller for adults. We’d booked our family holiday (a week in Cornwall) for 12th August and I gave myself a deadline of 11th August so I wouldn’t have to write while we were away. Because I finished the YA novel in February and did a lot of events in March and April to promote The Escape I didn’t actually start writing the new book until May. I was about 70,000 words into the first draft by the end of July giving me 11 days to write another 20,000 odd words and finish the book. Knowing I’d have to write flat out I temporarily abandoned my family and booked myself into Retreats for You in Devon for five days.

I had a wonderful stay, hugely productive and, by the time I left, the word count was up to 85,000 words. I delivered the finished 91,000 word draft to my editor on 11th August with just enough time left to pack before our holiday.

My edits are due back next week so, this week, I’ll mostly be tidying my study (it’s a tip!), decluttering the house and prepping for some masterclasses I’m running later this year. On 8th September I’m delivering a crime writing masterclass at Bloody Scotland, Stirling with Sophie Hannah and Doug Johnstone. Tickets are available here. Then, on 2nd December I’ll be in Plymouth talking about establishing plot and pace for the Writers & Artists ‘How to Get Published’ conference. You can find out more here. I will also be appearing on a panel with Clare Mackintosh and Sarah Pinborough at Bloody Scotland, appearing on a panel at the Killer Women festival in October and reading in the ‘caves’ for the Bristol Festival of Literature. More details on my events page. 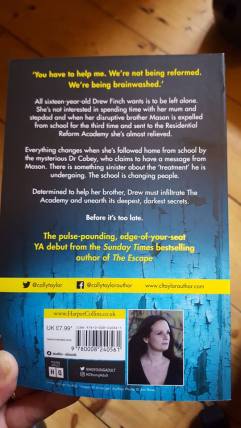 This morning the postman brought me a big box full of copies of my YA novel THE TREATMENT. They’re gorgeous. Not long now until publication day – 19th October.  It’s strange, having two books published in one year but I’m really excited about this book. I put a lot of my teenaged self into the main character, Drew – particularly issues I had with authority and the feeling that I didn’t have any control of my life. Drew is a lot braver than I was though! I’ll write a blog post talking some more about what inspired THE TREATMENT as it gets closer to publication date.

Quick aside – if you haven’t read THE ESCAPE (my fourth adult psychological thriller) yet you’ve got until the end of August to get the ebook for 99p and the paperback for £2. The prices go up again on 1st September.

And now for details of my giveaways… 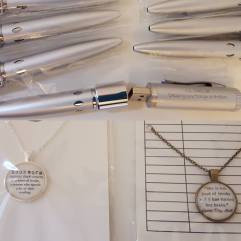 Over on my Facebook page I’m giving away NINETEEN prizes including three signed copies of The TREATMENT, three signed copies of Dead Simple, bookmarks, pendants and some very cool custom printed flash drives. They’re pens but also 8GB USB sticks with ‘C.L. Taylor – gripping psychological thrillers’ printed on the side. You’ve got until one minute to midnight on 3rd September to enter that giveaway. 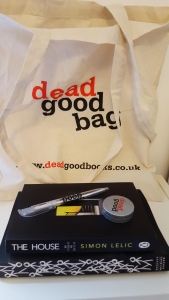 I’ll also be running another ‘thank you’ giveaway for members of the C.L. Taylor Book Club where I’ll be giving away my CrimeFest and Harrogate goody bags, signed copies of THE TREATMENT and Dead Simple and some more pens/USB sticks. Sign up now if you don’t want to miss out. It’s free, you can unsubscribe at any time and you’ll receive my 9,000 word story THE LODGER as a thank you just for signing up.