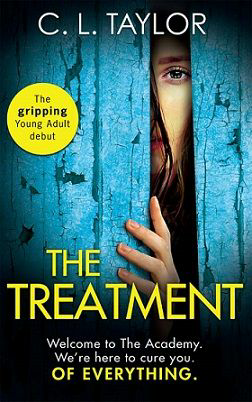 A week tomorrow my first young adult novel  THE TREATMENT will be published. It’s a thriller, about sixteen year old Drew Finch who tries to rescue her brother Mason from a residential reform academy after a stranger gives her a note saying that the students are being brainwashed.

The first inkling of the idea came to me in 2011, when I was pregnant with my son. I wrote 20,000 words of what I thought was a middle grade idea about a bunch of kids who develop super powers after a trip to the Hadron Collider goes horribly wrong. The government gather them up and do experiments on them and yes…I know, it’s basically the plot of X Men. What can I say, pregnancy hormones do weird things to your brain. Anyway, I ditched the words I’d written and wrote The Accident instead but something about the idea continued to nag at me. I still wanted to write about kids who were locked up and had to try and escape but I had to ditch the superpower element and come up with something more realistic.

Over the last couple of years the idea for The Treatment gradually came together. I wanted there to be a Prison Break element and there had to be some kind of ticking clock – a reason to hasten the escape. How about something along the lines of One Flew Over the Cuckoo’s Nest – a treatment that would forever change the inmates? But why?

Writers work in isolation but we can’t block out the outside world and, as I was mulling over ideas, I became increasingly worried about how right wing the UK was becoming. I became genuinely concerned that UKIP could end up running the county. And what then? Tighter immigration control, banning the Burka, a ‘social attitudes’ test? Those were the policies UKIP were admitting to but what, I wondered, might happen if an even more right wing party got into government? A reintroduction of national service, the death penalty, a police state?

I began researching social compliance and control and my research lead me to a website on the brainwashing and mind control carried out by the Chinese on American prisoners of war during the Korean War. Those kind of practices are outlawed now but what if a right wing government secretly used them to ensure that wayward teenagers were no longer a drain on society’s resources? And that’s when the final part of the puzzle fell into place.

Don’t get me wrong, The Treatment isn’t a political book by any means. It’s an out and out thriller about one girl’s attempt to rescue her brother from ‘prison’ but I wanted the ‘bad guys’ to be people who could exist. If not now then in the near future.

It’s a book I felt I HAD to write, regardless of whether it got a deal and, as I wrote it I fell in love with the characters – Drew, Mason, Mouse, Israel and the rest. I put a lot of myself into Drew. I drew on my own memories of being sixteen – of wanting to be in control of my own life, of questioning authority and feeling like an outsider. I remembered how it felt to be bullied, to be lonely and to be scared and then I made Drew a whole lot cleverer and braver than me.

There’s no romance in THE TREATMENT, no love triangle and no hero that swings in to save the day. The hero of my book is a sixteen year old girl. And I loved writing her. Why did I write a YA novel? I couldn’t not.

6 thoughts on “Why I decided to write a YA novel”